Blogging has brought so many great things in my life. The intention of blogging has never changed since the very first post I posted, it is a journal for the future May to read. All the idealism, the bitching, the inspiration and the sweet romantic stories packed into one hearty journal.

I’ve never intended to entertain people with my annoying rants or my cheesy love story but if you are entertained then it’s a bonus. =)

Blogging without blogwalking is like May without Bandi, it is not complete (sorry for the cheesy reference, I can’t help it) so when I started to blogwalked last year, I’ve met so many great people with so many stories. Some will leave friendly comments on my blog, some are silent reader, some can turn out to be good friends and chat occasionally with me on whatsapp. I’m so grateful knowing everyone and reading their stories.

And then I posted this post, and Dea emailed me that invitation was accepted. Meeting her was my very first time of doing the kopi darat (literate translate as land coffee) which means blind-meet up. After that, meeting other bloggers have been one of my favorite thing. =)

Dea came to Singapore last May with Utin, her husband. We had been emailing each other to plan her Singapore trip. When the day finally came, we met in Raffles Mrt because I told her I would bring her around for a day. It was a freaking hot day! And she survived! LOL.

It was so sweet of her to bring me emping and some Indonesian snacks (and those were the culprit of my sore throat later on :p). I was with Bandi and one of my friend, Klemens, who happened to visit and stayed at my place. So five of us went to Singapore walking trail in a very hot day, I still can’t believe we survived. It was a good coincidence that Klemens and Utin went to the same college and even shared mutual friends, later on we met another friend from Utin’s old University and we ended up having a big dinner. It was a fun HOT day.

Dea was sweet and really pretty while Utin was funny and cheerful. The two of them were so meant to be (also explained by how they met, such in a movie!) and Utin is head over heels in love with Dea, I can tell! (Or I’m just being sotoy.) 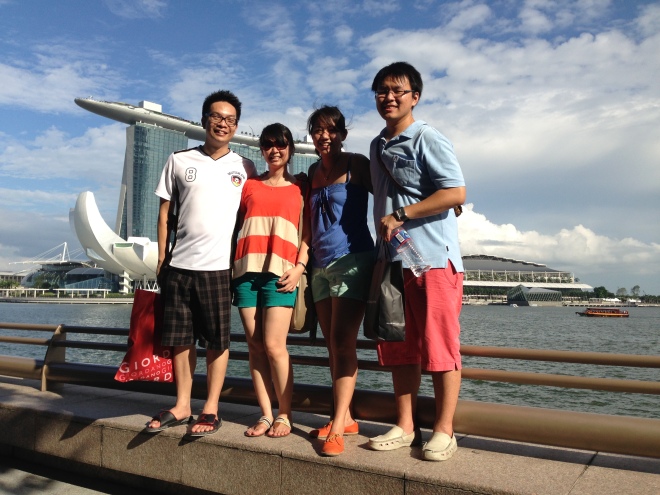 The four of us, somewhere in Marina Bay

Anyway, I hope I can meet them again some time in the future. =)

Keven was my very first reader. I didn’t know about blogwalking back then and also didn’t know how he found my blog. But thankfully he’d found my blog so we could get to know each other more.

He came to Singapore last August for his surgery (and thank god it went well) so we met up for a sushi a couple of days before the surgery. The full report was written on his blog here.

Just like he mentioned on his blog, we connected instantly, like old friends. We talked about life, love, food, dreams and one unexpected topic: GHOST! LOL. 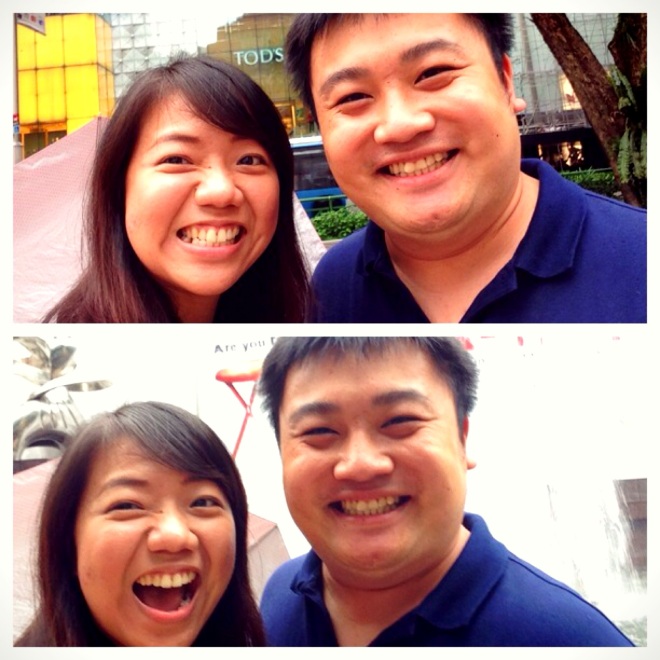 Keven and Me, at Orchard Road

Keven was cute and fun to be with. We have one thing in common: we both are romantic! Haha!

Chelle had to come to Singapore because she needed to take care of her pregnant aunty. In her busy days we managed to meet up for a dinner. I brought her to a Korean fast food because she liked Korean things. =)

From the very first time we met, I felt comfortable with Chelle. It felt like going out with my own little sister and she didn’t hesitate to hug me and snuggle with me. Awww she was so cute.

I listened to her talking about her life and her dreams. It was so good to know that this girl is full of energy and believed in dreams. Never let it go Chelle and keep striving for the best!!! =D

Chelle and Me, in Jurong Point.

We’ve been mentioning Sushi on each other’s comments for a while and it was finally the time to have a real sushi meet-up! We decided to try a sushi bar called KOH and how shocking it was that the queue was so freaking long that we spent one  and a half hour just for queuing!!!

Thankfully Lia was such a great companion so 90 minutes didn’t seem that long. she told me her 6 years LDR story with Robby and I was awed by how she was patiently going through the LDR. But she, herself, seems so patient and matured. She also gave me a lot of helpful advice for my upcoming European adventure. =)

Later that night Lia whatsapped me that we forgot to take photos together. Geez, how did we forget about it?! I think it means we must arrange another suhsi meet up!! yaiy!

Um, you all probably wonder whether the 90 mins queue is worth the taste of the sushi… Hmm, YES IT IS!!! The sushi is awesooommmmeee!! I would gladly queue for another 90 mins for that sushi! =D

I have been asking to meet her since long time ago because we both lives in Singapore but then Gil was so busy traveling around to Israel and then Hongkong so we postponed the meet-up a couple of times. (Yes, blaming to her, yes!) Hahaha no lah, it was also my fault too. :p

Anyway the most important thing is… we finally met!

We ate in a sushi restaurant (Yeah yeah now I realize Bandi was right saying I ate too many sushi) and she gave me this cutie bracelet. It was handmade by her friend. Thank you so much, Gil!

Gil is so talkative. LOL. Nah, It’s fun to talk to her. She’s like a non-stop machine gun and she never stop talking. She’s also adorably funny. =D

We talked mostly about her being a teacher and me being interested of going back to teach so I asked a lot of questions about being a teacher in Singapore. She looked so happy with her job and she looked younger than her age, both are probably the effect of being a teacher. You know, because it’s a fun job.

And of course the other thing we talked about was… TRAVELING! About the trips that she had done and her planned trip next year. I learned that Raimond has an OCD like me too (haha), he likes to organize things to the detail. You’re one lucky lady, Gil! =D

Oh and I forgot to snap photos with her, but don’t worry we both live in Singapore so it won’t be a problem. Next meet-up is probably another Japanese food. hahaha

My medan trip was almost being cancelled because of Bandi’s passport incident, but thankfully the passport came back on time so we could go to Medan. The meet-up just happened yesterday. I’ve been eating 7 meals a day in Medan and I almost didn’t make it to meeting Noni. I felt bad because I was late, so DAMN late. T.T

After we dropped off Matt to his office, we went to a coffee shop nearby and had a chat. The topic was of course traveling. She has good knowledge about Mt Bromo thus I asked a lot (way looot) of questions. Noni is easy going, fun and pretty! She’s surprisingly small. LOL. Don’t take this the wrong way Non, I meant you’re cute, you know. Hahaha.

It’s too bad we didn’t have more time to catch up because she seemed to have a lot of interesting things to talk about. I also only met Matt a little while (because I was so damn late duh) but actually I wanted to hear him talking about his work. =)

Anyway, not to worry, Non, cause I LOVE Medan (which was frowned upon by you and Matt, LOL) and I’m so going back… for THE FOOD! Hahahah.

None and me, in… a cafe which I forgot the name. :p

So yeah, I met new friends because of blogging and it’s been a bless. =)

I do hope I can meet everyone!!! But that would include a lot of traveling, which is a very good excuse! LOL

But if anyone of you wanted to come to Spore, I would gladly show you around with an exchange of syomai. :p Nah, just kidding. =D

May, with her extended waist line of Medanese food. WORTH IT!