So before you all get confused, let me tell you how it started first.

Bandi and I love to watch Masterchef USA since the very first season. Not Masterchef Jr, Not Masterchef Austalia, Indonesia, UK or anywhere, but Masterchef USA, because the three judges are so awesome. They are Chef Graham Elliot, Restaurateur Joe (an Italian guy who is so fierce and has the ice cold eyes) and of course our favorite guy… The one and only…

GORDON RAMSAY! (the right one, just to clarify)

Although Ramsay is known of his habit of swearing the F word, we just couldn’t help to love him. He’s so honest and original. Bandi loved him so much so he started to watch Ramsay’s other shows like Kitchen Nightmare, Hotel Hell, Gordon Great Escape and of course his cooking show. I personally love to see him cooking! He just seems so passionate about food. And of course… he is a Michelin star chef!!!

And and and, he once was being held gunpoint in somewhere around south America because he was spying on Shark Fin’s transaction. He defends animal rights! (Even though he’s a chef, isn’t that ironic, yeah yeah, here goes the animal activist. I am an animal activist too but let’s not get so dogmatic okay?) I liked him more and more lah!

Bottom line is… Bandi and I love Gordon Ramsay!

We planned to visit Ramsay’s Michelin star restaurant in London and even though Ramsay is no longer the head chef for his restaurants, we’re still excited for the fact that he trained the head chef and he was the one who approved the menu, so this must be good.

Bandi always said, “We trust Ramsay too much, we approved everything he said, have you ever wondered if he really has a good palette?”

Yeah, the only thing that can answer that question is if we eat in his restaurant… or eat his cooked food. The second one was almost impossible so we figured to just eat at his restaurant.

HE CAME TO SINGAPORE!

He came to Singapore accepting challenge from Singaporeans to cook off against three favorite hawker cook. The three dishes are Chilly Crab, Chicken Rice and Laksa.

For the Laksa itself, I don’t think Katong has the best Laksa in Spore, I still prefer Yishun’s. For the Chilly Crab, I still think “No Signboard” seafood has the best Chilly Crab in Singapore. But hey, it’s Singapore’s decision.

To make the story short, Bandi and I voted for the dish, and decided to… QUEUE TO TASTE GORDON’S COOKED DISHES FOR SEVEN FREAKING HOURS.

The cook-off started at 6 pm, and I started to queue from 1.30 pm. The luckiest thing is…

If only I was late 5 minutes, I wouldn’t get the ticket. Phew! What a lucky bitch. Bandi, me and my friend Elisa fot the last 100 tickets. There are about 700 other lucky persons queuing in front of us, and the other 800-ish people went home disappointed behind us. The other 200 tickets were for VIP’s.

I picnicked in the park, sat in the rain and sunshine, watched my iphone battery died, and finally mati gaya. I finally could taste Gordon’s dishes at 8:30 pm.

Bandi was sleeping and stress in the same time. LOL

And here it goes. The moment of truth. 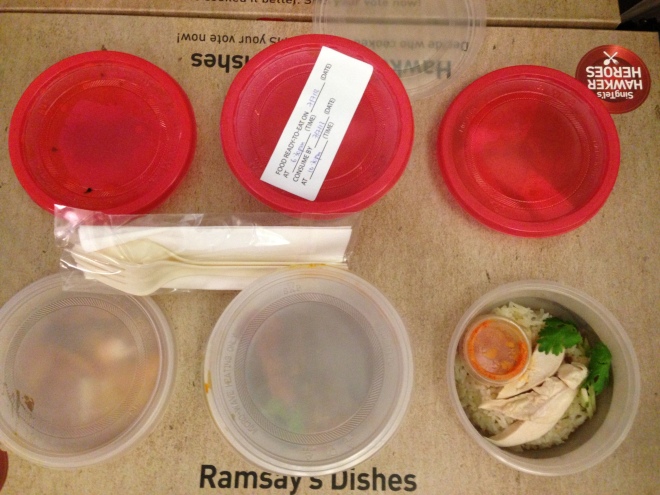 The moment I didn’t even dare to dream.

Chicken Rice: This is the non-guilty version of Chicken Rice. The rice is not oily (like any Hawker’s), the fragrant is extraordinary, something new! (I think Gordon put a new herb that’s never used in chicken rice before). It smelt foreign, but seriously aromatic and appetizing in the same time. The chicken is super tender and tasty. And the most surprising is the chilly, holy crap Gordon fucking nailed it! I LOVE IT. 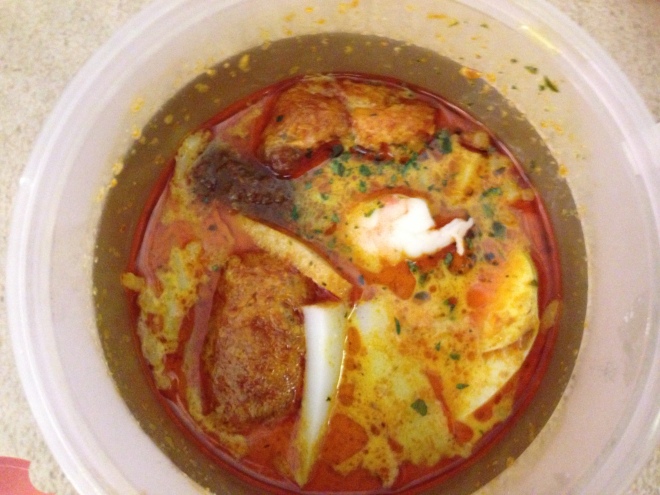 Laksa: Soup is very Laksa-like, but hotter and spicier. Shrimp is really REALLY delicious. I mean, how could you master cooking perfect shrimp? This guy really knows how to cook. The shrimp is perfectly cooked, not one second less or more. It’s just perfectly well done. Fish cake is just fine, Taupok is tender. It smells delicious also and the best things is… the laksa noodle is gooey. Remember that he only had 3 days to practice mastering the dish. And this 100% kicks Katong Laksa’s ass! 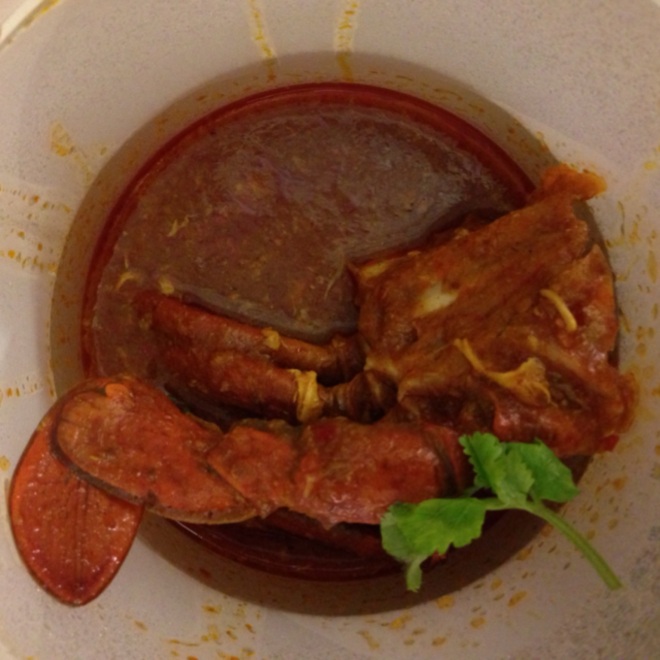 Chilly Crab: I didn’t eat the Crab meat, simply because it was so crowded by the time I got into the eating area (we were the last batch). Gordon was about to enter the room and everybody was screaming like hell. So I just tried the soup and took home the dish afterwards. The soup was okay, tasted more like Tom Yum for me but Bandi loved it! I brought back the Chilly Crab and gave to my neighbor Ricky and his brothers and sister, they all prefer Ramsay’s version. So I guess this dish is a winner.

Matter of fact, Ramsay only won the cook-off in the Chilly Crab dish. He lost Laksa and Chicken Rice. WHAT A BULL CRAP. I just feel that Singaporeans are too pride to admit Gordon cooked it better, or they just couldn’t open for ‘new flavor’ that Gordon brought into the dish.

Let me give you my honest opinion.

Gordon is not only a good chef, he is surprisingly humble, funny and outgoing. He jokes around with people with his witty sense of humor. He gave around his autograph, he took photos with people and made sure the photos were okay. He’s just so thoughtful! He slept on 4 am the night before for practicing, can you imagine how tired he is (consider cooking in the hawker center is damn hot and stuffy!) But he’s still very humble and thoughtful.

I didn’t have the heart to chase him for photo or autograph not because he’s tired and I pity him lah (of course I don’t care what?) I was so freaking tired I thought I would faint and passed out. Hahaha. So I left as soon as I saw him and watched him do funny things. =)

From cooking point of view, this is my opinion:

THIS GUY CAN COOK! He has a good palette (at least I approved his palette) and he’s revolutionary in the kitchen. He’s total, perfectionist and professional. He gives 100% for every dish he prepared. I was the last 15 people he served and my dish still looked pretty.

Here’s some photos I took from random internet (just because my phone was nearly dead by the time Gordon entered the room and I didn’t even have the energy to fight over hundreds of people around me).

Gordon prepared the tray of food for us. =D

I was somewhere there if you could find me. :p

He was eating in Katong Laksa a couple days ago.

After 7 hours of queuing, ate the amazing dishes, Bandi and I went home and he said, “what the fuck just happened?”

And then we laughed stupidly. Yeah, what a meaningless 7 hours. We could’ve… I don’t know, saved the world instead?

But minutes after we stopped laughing and blabbering, we high-five-ed, “WE JUST ATE GORDON’S FOOD!” And IT’S FREE!!!

What are the chances for that to happen, riiiggghhht??!!!

Gordon you are fucking awesome!!!!!

May, #TeamGordon all the way!

53 thoughts on “Gordon is fucking awesome!”