So far everything is right on track, unless one thing… I’m still fat. Haha! I suppose to lose some weight for this trip (which I treat and plan as if it’s my wedding) but so far it’s only 1 kilo down on the scale.

I have finished my level 1 French course and I must say… I like the sound of me speaking French, feels like I’m hundred times sexier. Roarrr.

When I tried to build a sentence in French for the first time, guess what did I make?

Mon petit ami est beau. XD which literally means pacarku ganteng. What a waste of money going on a course, right? Kidding. I also learned a lot of things and it was so interesting. I must say, learning new language in this age is very hard. Guess my brain is not working as hard as ten years ago. French itself is a very complicated language, using female and male on words not only in nouns but also in adjectives!!! I don’t think anyone could have mastered French from only book and courses. They must live in France or use it on daily life. It’s almost impossible to remember every object or words whether it is female or male. Geez.

Since I will stay for only three days in Paris, why bother to learn French? Well, it’s actually been my lifetime obsession to know how to speak French. =)

For my blogger friends who practically shouted at me “GO TO FIRENZE!!!” I took your advise. I will go to Firenze too and I drop Vienna for that. 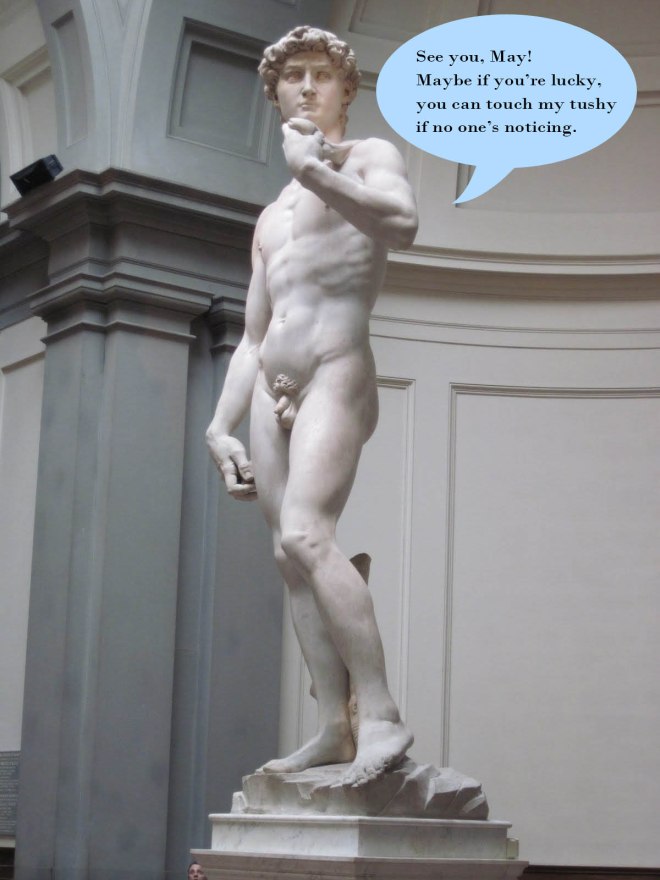 Awww David, stop it you!

Bandi and I have checked one more checklist, which is: Buy Rome-Athens ticket. And guess how much? Freaking 43 Euros only!!! Hail budget airlines!!!

Because I have bought the Athens ticket, I will positively spend 4 days in Greek Islands. It used to be only Santorini in our plan but now I begin to think I should add one more island. After hours and hours of browsing it all came down to either Ios or Mykonos. Ios will be the kind of island who parties non stop and happy all the time, just picture your most stunned friend when you were in college. Mykonos will be the kind of island who drinks coffee on the edge of a cliff, talking about books, just pictured your hipster uncle highly caffeinated.

(I wanted to put picture of Ios too but when I googled, there were only thousand pictures of iphones. zzz) Yeah, yeah I know, not an excuse.

Anyway, after hours and hours of thinking… I think we will go to Mykonos. (Yeah yeah I’m already old.) The other reason of why I want to add one more island is merely because I want to take a ferry. As much as I don’t want Bandi to throw up again, I really want to go cruising through the Aegean Sea. Everyone on the internet said it’s the most scenic and beautiful ferry ride ever!! Waaaa!

Will really appreciated if anyone has insight about it. Is it too tight to spend one night at Mykonos and two night at Santorini?

Thank you in advance! =D

P.S Help me to plan the whole journey here. =)

16 thoughts on “Another checked check-list.”

Leave a Reply to The Sanguine Cancel reply